Willem Hofhuizen allowed himself to be influenced by philosophers such as Plato, Nietzsche, Heidegger and many others, whose ideas he used to develop his own philosophical insights. "It seems to me that the notion that virtuosity goes at the expense of intensity, credibility or expressive power is a misconception mainly found among those cheerless, orthodox people who resort to a clumsy kind of expressionism or relentless engagement," he once said in an interview. "They reject every tradition or convention and keep running after the spirit of the times, which they never seem to catch and ultimately - when they are completely out of breath - can only wave goodbye to."

Hofhuizen's first teachers, at the State Academy for the Visual Arts in Amsterdam, were Johannes Hendricus Jurres (1875-1946), virtuoso and gentleman, who always took his hat off to acquaintances he met in the street, and Heinrich Campendonk (1889-1957), a melancholy but progressive German who disliked oil paint and had a penchant for large, monumental works.

Hofhuizen initially studied under the supervision of Professor Jurres, but after some time he got the feeling he was being held back by the "grand" and traditional designs that were this teacher's specialty. Hofhuizen wanted to develop a more transparent style and asked to be transferred to Professor Campendonk. The latter taught him expressionist techniques and ideas. Campendonk, a member of the "Blaue Reiter" group, was a well-known expressionist himself. But there was another reason why Hofhuizen wanted to work with Campendonk: they shared the same passion for the monumental. [This passion, incidentally, was the main reason why Hofhuizen later moved to the 'Catholic' south of the Netherlands, because he was convinced that monumental works of art would be in greater demand in this region.] Both Hofhuizen and Campendonk suffered from the low demand for monumental art in the post-war period and had to revert to smaller works - Hofhuizen to oil paintings and Campendonk to prints. Hofhuizen's early paintings are unmistakably expressionist in nature, but later his brushstrokes became more refined, with a more sensitive touch and the kind of transparency that he liked so much. Their direction and shape softened, but remained unmistakably Hofhuizen. Thus we see Hofhuizen's style change from expressionist to a kind of individual renaissancism. For example, the work Free after Rubens from 1974 is, to say the least, renaissancist, if not baroque. Could it be that Jurres reclaimed his place in Hofhuizen's mind?

From Dionysian to Apollonian

In The Birth of Tragedy Nietzsche presented his theory of the ancient dualism between two types of aesthetic experience, namely the Apollonian and the Dionysian; a dualism between a world of the mind, of order, of regularity and polishedness and a world of intoxication, chaos, ecstacy. The Apollonian represented the rationally conceived ideal, whereas the Dionysian represented artistic conception proper, originating from man's subconscious. The analogy with the world of the Greek gods typifies the relationship between these extremes: two godsons, incompatible and yet inseparable. According to Nietzsche, both elements are present in any work of art. The basic characteristics of expressionism are Dionysian: bold colors, distorted forms, painted in a careless manner, two-dimensional, without perspective, and based on feelings (the child) rather than rational thought (the adult). In Hofhuizen's work we see a gradual shift from the Dionysian to the Apollonian. Towards the end of his life he called himself an "Apollonian painter", which was reflected in his changed use of color and the rounder forms of his subjects, although he kept true to the flat - two-dimensional - representation of these subjects.

After Campendonk there were many other artists who influenced Hofhuizen, for example Cézanne, Modigliani, Chagall, Matisse, Tiepolo (Giovanni Batista), Guardi (Gianantonio), El Greco and Rubens. But above all he was influenced by Massimo Campigli (1895-1971).

Campigli himself was influenced by the Etruskeans and Minoans. And so was Hofhuizen. At a basic level, Campigli's influence remains recognizable. It was not until later, after Hofhuizen had visited an exhibition in Paris on 18th century renaissance painters, that he was influenced by Tiepolo and Guardi. His compositions changed, and the colors of his paintings became richer. He developed a special technique of his own and came to be regarded as a true master in the use of colors.

Willem Hofhuizen must have brought many an art restorer to despair, with one exception: Peter Driessen. From a very young age, Peter Driessen stood with his eyes glued to the canvases that the old Hofhuizen, with a Dionysian grin on his face, was preparing in Apollonian fashion. He watched how the artist set up a composition in tempera over a charcoal sketch and then applied the first glaze, consisting of burnt sienna and emerald-green oil paint thinned with damar and venetian turpentine. Over this layer, Hofhuizen applied smaller or larger quantities of white tempera to accentuate light and dark parts. Then he applied the second glaze, and after that he added the colors in oil paint, which he sometimes accentuated with white tempera. To protect the parts he had treated with the fragile tempera, he applied yet another glaze consisting of the above-mentioned mixture and oil paint in the same color as the one that remained after the previously built layers. Some of Hofhuizen's paintings have a very thin final varnish, but this was usually applied only locally and only to reinforce the dynamic interaction of the various colors.

20th century expressionism, which originated in Germany, was a basically Dionysian movement. The German expressionists rejected conventions that had dominated the visual arts for many centuries. Whereas painters had traditionally tried to express their inner vision of reality in accordance with certain rules such as the "diagonal" and the "golden section", the expressionists sought to express their most intimate emotions and were looking for the "primitive" (as found in children). There is a remarkable kinship between the German expressionists and old masters such as Matthias Grünewald (15th-16th century) and El Greco (16th-17th century), painters who were very much part of a tradition but at the same time were fascinated by the primitive and as such definitely influenced Hofhuizen. The Fauve Group, the French counterpart of 20th century expressionism, were inspired by Van Gogh. The "primitivism" they were looking for was that of savages rather than children, but the movement was definitely Dionysian in nature. Matisse, Dufy, Raoul and De Vlaminck were among its proponents. In 1948 a group of expressionists and fauvists gathered together and founded Cobra. Hofhuizen had been invited to join the group but ultimately decided to go his own way. Maybe it was because of the geographical location of Maastricht, or because of Hofhuizen's "difficult" character, or maybe he already knew he was going to create paintings like "The Judgement of Paris" and "Table Conversation", but the fact is that Hofhuizen did not join Cobra and his contemporaries lost interest in him. Hofhuizen kept true to the Dionysian spirit but at the same time fell in love with Apollonian beauty and sought to eliminate the subconscious element. He remained a sensual, religious man and refused to become engaged in social or political issues. He became an “Apollonian expressionist” and thus was able to combine the two primal forces, the two godsons, in one and the same work. In the words of Paul Haimon about Willem Hofhuizen, he was an artist who sought... 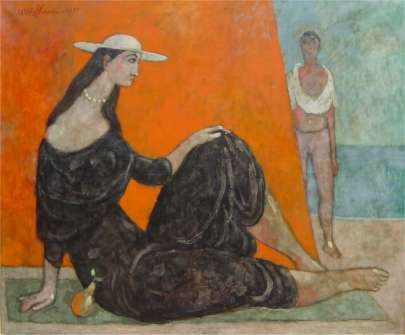